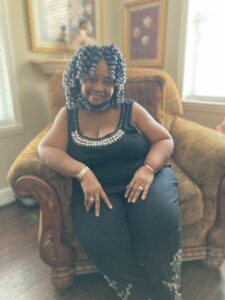 Edna has lived in her CASA apartment for over ten years. Originally from Washington D.C., she moved to Durham with her husband and her son in 2008. Her husband died of congestive heart failure soon after.

Edna has been a preschool teacher for over 40 years, and her salary at the time was not enough to make ends meet. “When my husband was living, he was carrying most of the bills and I would just pay the utilities,” she says. “When he died, the lights went off, the gas went off. I went to the owners and asked if they could bring the rent down, and they wouldn’t.”

Edna felt like she was out of options and needed to find a place to live fast. “With tears in my eyes, I got on the computer, and I looked and found CASA.”

Today, Edna is still in her apartment. She says that over the years, she’s met some amazing people. “I have had some wonderful neighbors that lived here. Neighbors that cared about each other.” One neighbor stands out. She says, “He would go out and make sure the salt was there when it snowed. He would take me to the grocery store when my son didn’t have a car. We looked out for each other.”

One of her favorite things to do now is cook and entertain for others.  “I love fried chicken, I love hickory smoked BBQ pork ribs, collard greens with smoked turkey in it,” Edna says. She even makes corn bread with extra sugar, melted butter, and a little bit of vanilla. “My son says it tastes like cake!”

Edna’s son also cooks, and he’s got some of his own specialties. “When he does macaroni and cheese for Thanksgiving, he puts goat cheese in it. It’s delicious.”

Edna’s son is now 32 and lives in Winston-Salem. He is working on getting his master’s degree in business administration. “He is my one and only. I am very proud of him. He’s come a long way.”

Edna says her apartment has been a blessing to her and her son. “I didn’t know where I was going. When I came here and saw the apartment, I was so proud.”