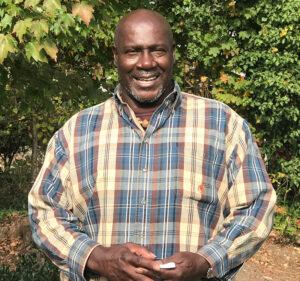 Ernest is a veteran and has lived in his CASA apartment since 2016. Before moving into his CASA apartment, he experienced hardship and ended up homeless. He says being homeless was like being incomplete. “I never slept under no bridge. Because of my military service I never really had to sleep under a bridge, but I have been in and out of different hospitals trying to recover. But through that process I found my way.”

Ernest ended up seeking help with the Veterans Administration. “I knew of the HUD-VASH program, and that’s how I came to know CASA.” His case worker at the VA got him set up with benefits and helped him apply for an apartment through CASA.

Ernest has made incredible strides since moving into his apartment, and he says he feels like a different person today because of everything he’s gone through, “I know me. I’ve gotten my own identity now. I understand that I can make a mistake and its okay. The way I was raised, mmm. No mistakes. Naturally I didn’t know that as a kid, but as I grew up, read my bible, talked to psychiatrists and so on and so forth. I began to realize, especially through reading my bible, ain’t no perfect person. No matter how much you wanna be. So, I’ve come to know me, I’ve come to trust me, I’ve come to love me.”

These days, you can find Ernest relaxing in his apartment or out fishing. He says he loves to fish in lakes and ponds, but not the ocean because “there’s too much water”. He prefers to think like the fish do and move around the lake.

“Life is good. Life is better. And I feel like it’s better because of all I’ve been through. Because the process is humbling. I became humble enough to take some suggestions from somebody else.”