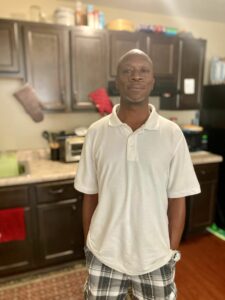 CASA tenant Tremayne lives in an apartment building specifically dedicated to veterans who have experienced homelessness and live with a disability. Tremayne was in the Navy for 7 years and moved into his CASA apartment a little over a year ago when

Tremayne has big plans for the future. He’s currently in school at Wake Tech studying radiology. One day, he hopes to open his own business and do mobile radiology. “Trust me, I have a plan”, he says.

Tremayne turned 46 last week and says that as he’s getting older, he’s been working on a list of things he wants to do before he gets too old. “Some people call it a bucket list–I have a pail. I wanna go skydiving because I never did when I was stationed in Hawaii.”

The security of a home allows people to think and plan beyond where they’ll sleep that night. An investment in CASA is an investment in someone’s future. Please consider a donation today at www.casanc.org/donate