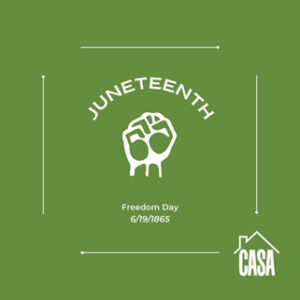 Yesterday marked a historic event, when Juneteenth was officially declared a National Holiday in the United States. June 19th marks not only a time for celebration, but also for reflection on our nation’s past.

Juneteenth is the oldest nationally celebrated commemoration of the ending of slavery in the United States. It celebrates the date when Major General Gordon Granger led the Union soldiers in finally freeing the enslaved people in 1865, nearly two and a half years after Lincoln’s Emancipation Proclamation. Prior to this date, the Emancipation had little effect on the area; there were few Union soldiers to enforce the freedom of slaves; however, after Lee’s surrender earlier that year and the increase of soldiers, the resistance was finally met and beaten, freeing the enslaved.

The date became a time to celebrate through traditions such as rodeos, fishing, baseball, and most importantly: barbecuing. Around the early twentieth century, the celebrations began to decline as a result of both economic and cultural factors. Eventually, textbooks only included the date of the Emancipation Proclamation on January 1, 1863 and not June 19, 1865, the date of Juneteenth. The celebrations began to resurge amidst the Civil Rights Movement in the fifties and sixties, and recently amidst the Black Lives Matter Movement. The holiday now is a celebration of freedom and achievement and symbolizes that the events of June 19, 1865 are not forgotten.

Though we celebrate Juneteenth’s official recognition as a national holiday, there is still much work to be done. There is still racial inequality in the housing industry in the United States, even though old racist housing policies, like redlining, have been eliminated. Even before the pandemic, eviction rates for Black renters were significantly higher than for white renters, making people of color far more likely to experience homelessness. Affordable housing is part of racial justice work, and CASA is proud to be part of the solution.