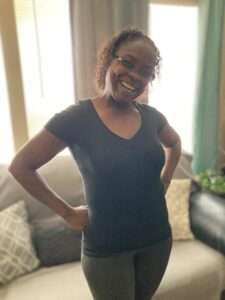 Marilyn was born and raised in the Triangle, and her whole family is here. Her parents are nearby, she’s got a sister and a niece just down the road, and her daughter, grandkids, and son-in-law are a quick 20-minute drive. She says, “I’m family oriented. I have to have that family structure.”

Marilyn’s 6 grandkids mean the world to her, and one of her favorite things about her apartment is having the space to have them over. “That’s one of the reasons this all means so much to me,” she says. “This right here has made it so my grandkids can come and spend all the time with me that they can.”

Marilyn fell on hard times when her 15-year relationship ended because of domestic violence. “It wasn’t all bad. We actually had a beautiful thing, but it was just toxic. It was very toxic. And it was hurtful,” she says. Even though the relationship had to end, Marilyn reflects with positivity, “It made me stronger. It made me realize what I’m willing to put up with, what I’m not willing to put up with, what I’m worth, and what I deserve.”

Marilyn moved in with her best friend, who was getting ready to move to El Paso to be closer to her boyfriend. Marilyn decided it was time for a change and jumped at the opportunity. They moved to Texas together. “We were unicorns. There’s not a lot of black people there,” she laughs. “It was funny—I was so amazed.”

Marilyn’s time in Texas was short—being family oriented, she quickly became homesick for North Carolina. “I cried every day because I missed my grandkids! I thought I could do it, but I’m not that strong. Without my grandkids I’m nothing.” Her family realized how sad she was being so far from home, and they raised the money to bring her back. When she returned, however, she had nowhere to go and ended up couch surfing and staying with friends and family. She tried hard to find somewhere to live but seemed to hit roadblocks at every corner.

“I was filling out applications for different apartments,” she says. “Everyone closed the door on me. Everyone. It was because of income and because of my credit.” When a family member told her about CASA, she jumped at the opportunity. Marilyn has now been in her CASA apartment for just over a year. She’s been working two part time jobs—one at Amazon and one at Food Lion—but still says she has plenty of time to see her grandkids.

This apartment is the first time Marilyn’s lived on her own, and she is loving it. “If I don’t wanna deal with you today, I’m not dealing with you today, baby!” she jokes. “My house can stay clean every day. I don’t have to worry about anything!” Her two jobs have even helped her save up to buy a truck.