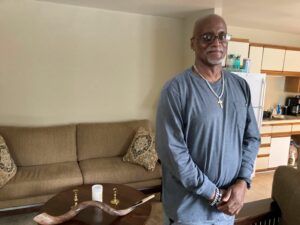 Michael moved into his CASA apartment in early April 2022. He is 64 years old. His apartment is spotless, completely dust free, and tastefully decorated. It’s clear that he takes a lot of pride in his new home and values cleanliness.

Michael is originally from Hampton, Virginia. He was born in Philadelphia but moved to Hampton when he was in 6th grade. He has a 29 year old daughter who still lives in Hampton who he talks with on the phone every single day. Michael is an army veteran, and served 4 years active duty and 4 years reserve. He was stationed in Germany for several years. When he got back to the US, he got a job working at a shipyard and stayed for 13 years. “I don’t like being dirty. And working in the shipyard, its a very dirty place.” He realized that all day long he was sucking in the thick black smoke from the shipyard. He couldn’t take it and quit.

After working in the shipyard, Michael opened his own mobile mechanic business. “I had fun doing that. Running the business, detailing people’s cars,” he remembers. “But once the economy shifted, the business shifted too. I started having some struggles.” Michael closed the business in 2020 and hit a low point with his mental health. “I had some trauma in the military. It felt like one thing after the other, and I was an introvert. I didn’t really know how to talk about stuff,” he reflects. After experiencing homelessness, Michael remembers hitting a point where he felt like he just couldn’t do it anymore. His mental and physical health were struggling, and he felt completely hopeless. “I called the VA and the VA told me to come on in, and that’s when I first started my PTSD training.”

With a little bit of help, Michael got back on his feet and started looking for a place to live. The problem was he didn’t make enough to show 3x the rent, a common requirement for renters. Eventually Michael was connected with CASA. Like all CASA residents, Michael’s rent is set at 30% of his income so that it remains affordable to him. Reflecting on his first night in his apartment, Michael says, “It was… surreal. It was different, peaceful. I was still in awe of just being here and having my own place. I was really gratified. I thanked God a lot for what he did. I was just very happy. I’m still very happy. I think I’m gonna be very happy for a long time!”

Now that Michael’s housing is stable, he’s going back to school. He’ll be attending Southeastern Baptist Seminary in Wake Forest. “My dream is to be a chaplain in the prison system. Of course, by then I’ll be 70 years old,” he laughs. “That became really important to me- to help somebody like me who really wants to get help.” Though he’s had a challenging life, Michael believes, “The universe will make a way. When you do right, right comes back to you.”