In Memoriam: Tribute to Longtime CASA Board Member, Stephen Salisbury 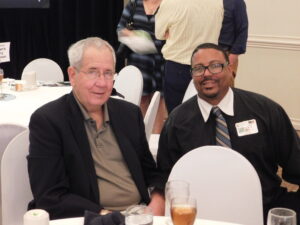 Steve Salisbury with Jesse H., a resident at CASA’s Denson Apartment for Veterans who interviewed him. Taken at CASA’s 25th Anniversary celebration in 2017.

Stephen Robert Salisbury (September 17, 1942 – April 29, 2021) was a founding Board member of CASA.  After many years of Board service, he remained active as an Emeritus member until his hard fought battle with Parkinson’s disease prevented him from being able to continue.

In the 1980s, Steve volunteered as an overnight monitor for Raleigh’s homeless shelter. He learned as much as he could about how to help and became Chair of the Wake County Human Services committee. There, he endorsed the formation of a Housing Committee which led to the creation of CASA as a nonprofit in 1992. CASA Board member Keith Hull, who served with Steve for more than 20 years shares, “Steve Salisbury was an inspiration to me. His pleasant demeanor, self-deprecating humor, diligence, consistency, and ‘people’ skills served as a model for us all. What a remarkable legacy he has left.”

In 2009, CASA completed construction on 10 one-bedroom apartments designed to end chronic homelessness in Raleigh and named the community Salisbury Apartments in his honor.

In 2017, a veteran who recently moved into CASA housing asked us if he could interview one of the people who started CASA.  We took him to meet Steve at home.  Our resident was sincerely trying to figure out WHY someone would devote so many years to helping people he didn’t even know. Steve was so humble that Ann, his dear wife of more than 50 years, had to espouse his longstanding advocacy for people experiencing homelessness.  Finally, Steve shared that he had an epiphany one day while looking out of his high rise bank window downtown. He saw the soup kitchen line forming down on the sidewalk every day for lunch, and he couldn’t shake the feeling that he could help.

All of us at CASA send our love to Steve’s adoring family, especially his wife Ann.  We take heart that Steve’s impact continues to bring peace and stability today because he made it his mission to see ours succeed.

CASA’s Senior Maintenance Supervisor, Kelly Myers, gave what we believe would be a high compliment to him: “Steve made everyone feel comfortable while in his presence. We need more people like Steve Salisbury in the world.”